As we leave February and begin to experience the first signs of warmer weather, we thought it would be the perfect time to discuss induction systems. The principle is quite simple. First, we have to understand the Venturi Effect. It is the reduction in fluid pressure that results when a fluid flows through a constricted section of a pipe. The restriction increases the velocity to conserve mass continuity. This create a vacuum if there is a hole in the pipe. (See figure 1).

In this article, we will discuss three different systems which uses the principle of induction. 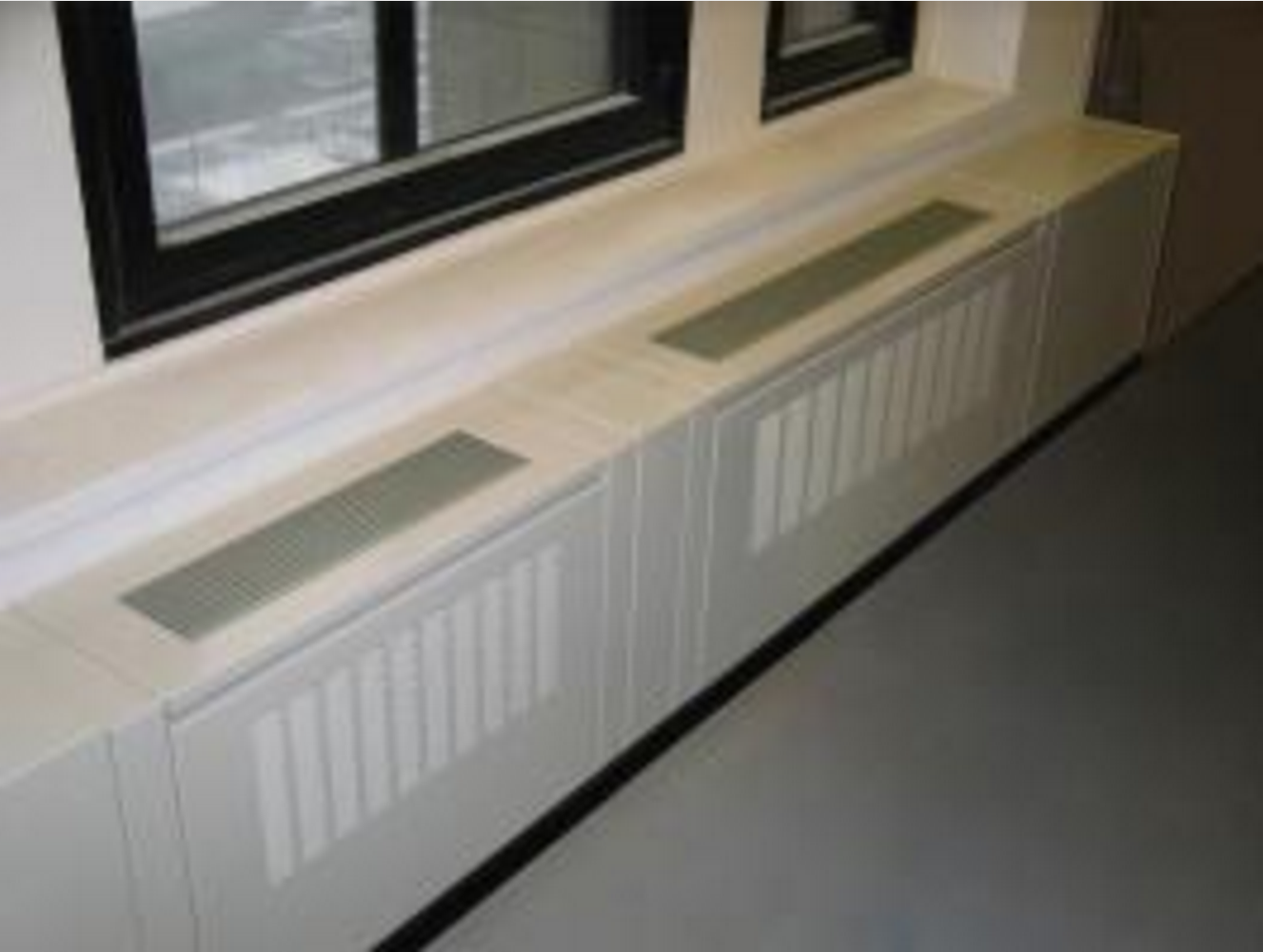 The first induction system is the perimeter induction terminal. It was invented by Willis Carrier to overcome the issues of large central duct risers and extensive branching to many diffusers. His invention was smaller and consumes less energy than the existing HVAC system of this period. We found those induction terminal in office buildings, hospitals, hotels, etc. It was the system of choice for 1930’s to 1970’s.

Technically how does it work?

We first need an air handling unit (AHU) that provides fresh air. This give us a small AHU and few bulky ducts, since in most cases the primary air velocity is in the order of 15 to 25 m/s. This unit is composed of a fresh air damper, filter, a heating and cooling coil and a constant fan. The flow is set according to the number of people in the rooms. The AHU creates the primary air always at the same temperature for the inductions terminal. This primary air is passed through an array of nozzles in the terminal unit that creates a vacuum effect. This effect is the induction phenomena. The vacuum recirculates the air from the room through the terminal unit coil. The room air is called the secondary air. Finally, this air mixes with the primary air and is discharged in the room (see figure 3).

The temperature in the room is controlled by throttling the water through the coil with a valve or a damper which bypass the air around the coil. 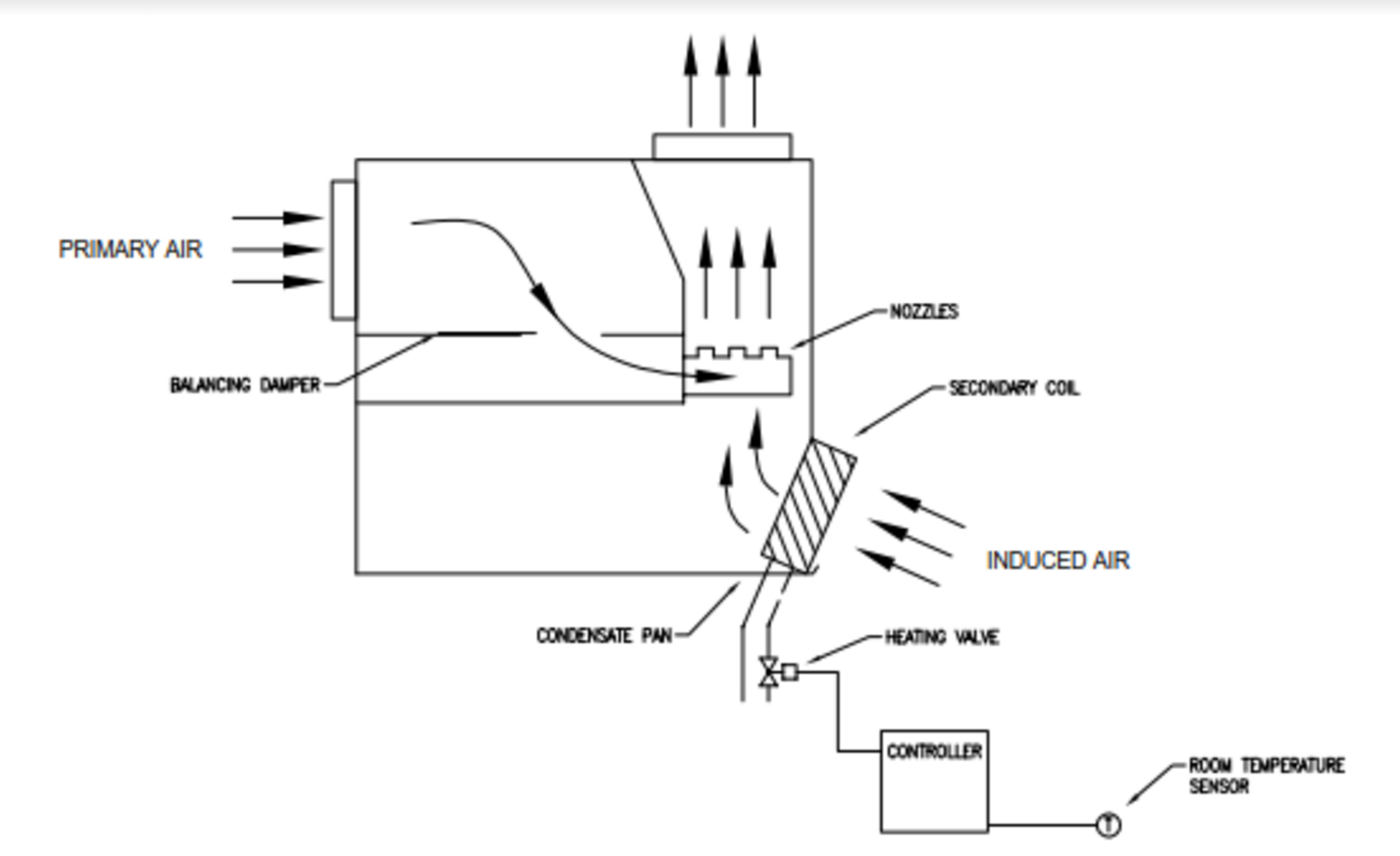 There are many variation of induction terminals to control the temperature in room space. Here are some examples:

Nowadays, we find less perimeter induction terminal in new constructions. There were certain negative aspects of those system that became more significant. Indeed, excessive fan energy associated with the high pressure primary air requirements of the nozzles (up to 2 in. wc.) and rezoning difficulties did not meet the needs of new building occupancy profiles. There were also causes of moisture to condense coils during cooling operation and excessive noise due to the high pressure passing through the nozzles.

The second system is the Induction variable air volume terminal unit. It was created to solve the issue of cold air dumping with the traditional VAV unit. Indeed, the traditional VAV unit vary the airflow to maintain a constant temperature in the room. In a 100% heat load, the room is properly flush and everyone is happy. But if the heat load is reduced to 50% the room is no longer properly flush and the room becomes stagnant. Below 50%, due to the low air velocity, the air no longer travels along the ceiling. It will drop vertically from the diffuser to the space. This is called cold air dumping. The induction VAV unit will eliminate this problem with the fact that the room is always properly flush.

Technically how does it work?

The induction VAV terminal are designed particularly for systems with high variations in heat load. It is able to maintain comfort even in extreme load variations. This specific characteristic means that cold air dumping will never occur and that low primary air temperatures can be used. 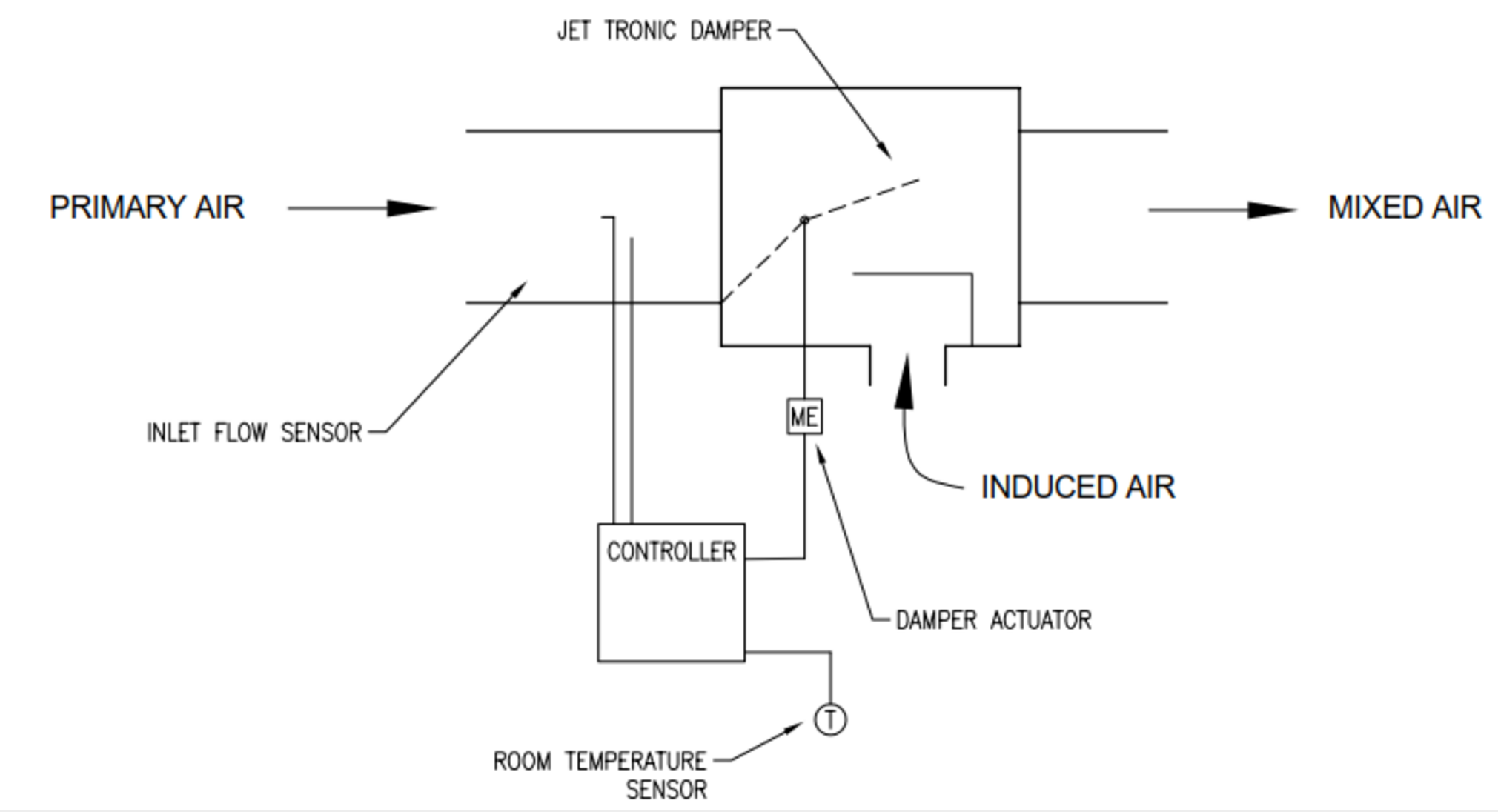 This unit is an excellent alternative to fan powered air terminals. This one is quieter due to the absence of a fan and less maintenance.

They are many advantages for using an induction VAV unit:

For better comfort, it’s possible to install an water heating or electrical coil.

An ACB is consist of fin-and-tube heat exchanger contained in a housing that is suspended from the ceiling. The primary air passes through the nozzles, which induce air from the space up through the cooling coil. One of the biggest challenge of the ACB is to maintain a primary air with no humidity. Indeed, the chilled beam typically does not contain a condensate drainage system. Therefore, the primary air system must maintain the dew point of the indoor air below the surface temperature of the chilled beam to avoid moisture from condensing on the coil. 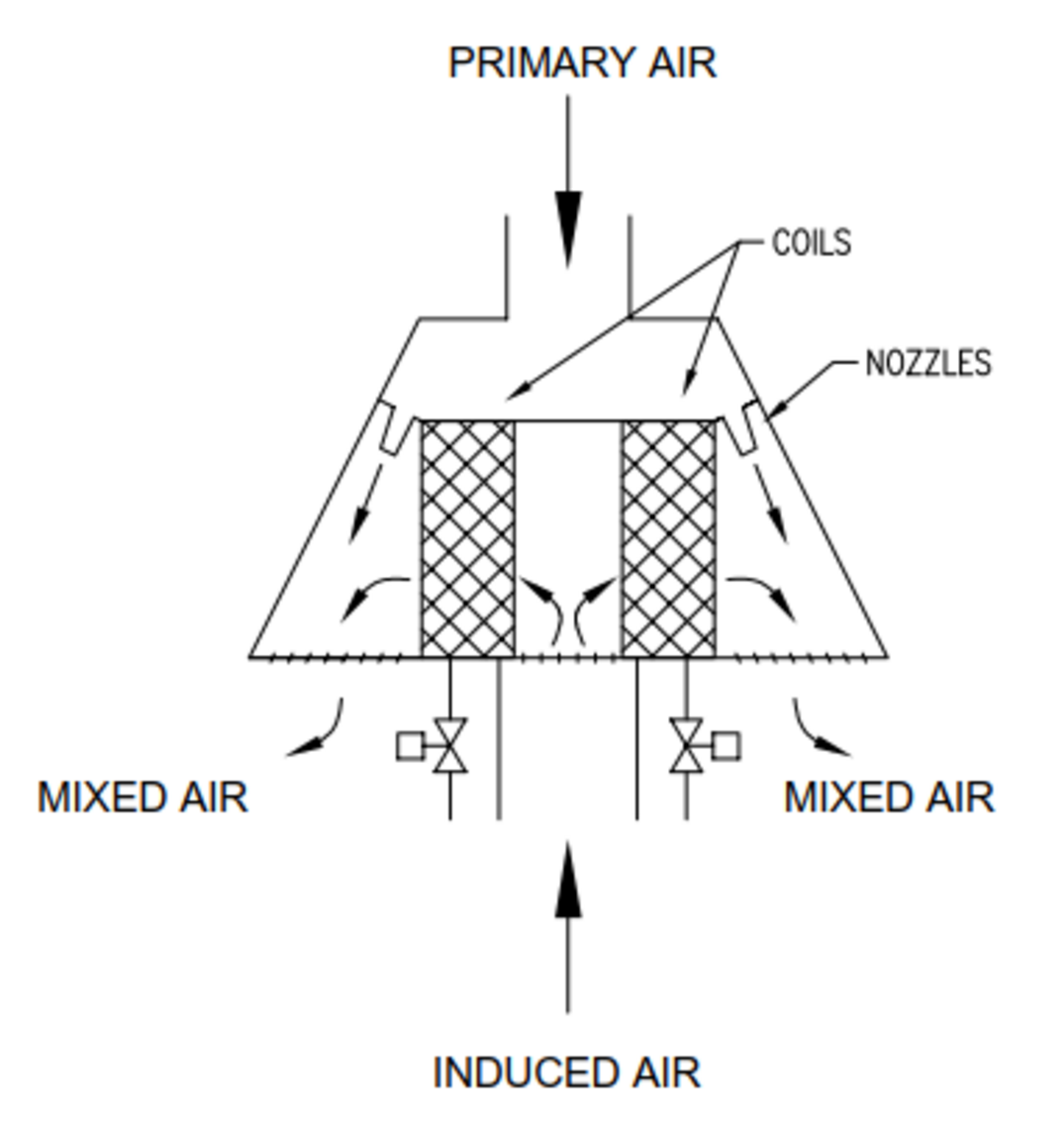 The air handling unit (AHU) must deliver the require amount of outdoor air to each space for ventilation. The AHU must also dehumidify the outside air such that it is dry enough to offset the space latent load and maintain the indoor dew point low. Finally, the unit must deliver enough air to induce sufficient room airflow to offset the space sensible cooling load. More primary air there is, more room air will be induced through the chilled beam coils. This is cause by an high static pressure. However, a higher inlet pressure requires more fan power. To avoid the excessive fan energy like the high pressure perimeter induction unit from the 1930s to the 1970s, ACB are selected with an inlet static pressure between 0.3 and 0.5 in. wc.

There are the 2 pipes or the 4 pipes system design available. With the 4 pipes design, some zones can receive cold water for space cooling, while other zones simultaneously receive hot water for space heating. With the 2 pipes design, all zones receive either cold water or hot water. This kind of design would need to either add heat to the room with a separate heating system such as baseboard radiators or convectors.

In both design, there is a room thermostat which modulate the cooling or heating valve to maintain the room temperature constant.

For the cooling coil, the temperature must be relatively warm (between 58°F and 60°F) to prevent condensation. With a warmer water temperature, more coil surface area Is needed to provide the required cooling capacity.

The pros of the active chilled beam would be:

The cons of the active chilled beam would be:

For the moment, this is a new technology for the US. It is starting to emerge as an alternative to conventional VAV system. They have been used successfully in Europe for the past 20 years, where they have become standard practice.