Ever wondered what was the difference between sensible and latent heat? How do we apply these concepts in HVAC? To begin explaining the difference, we must first understand what exactly is heat and how heat transfer and thermal balance works. It is the foundation to a stronger understanding of how heat pumps and refrigeration cycles function.

Heat is a form of energy that spontaneously passes between an object and its surroundings, in some way other than through work or the transfer of matter. Heat is always transferred from a hotter form to a colder one, which will eventually bring the two forms to the same temperature. This phenomenon is called, thermal balance.

How do we measure heat?

We measure heat by registering the object's temperature - the measurement of its thermal state. In other words, it is a comparative measurement of how hot or cold the object is. Many scales and units exist for measuring temperature, the most commons are the Fahrenheit (°F), Celsius (°C) and Kelvin(K).

The transfer of heat can be done three different ways:

Conduction heat occurs when a warmer object is touching a cooler object. The heat is transferred from the warmer object to the cooler object until they are both the same temperature. For example, a metal bar which is heated at one end. The heat would flow through the media to the other end of the bar.

Convection heat occurs with liquids and gases, and is the more efficient way to transfer heat. The process occurs when less dense warmer areas of water or gas rise to a cooler areasy. This begins a circulation as the cooler areas move to the warmer areas. Ever heard the phrase "hot air rises"? This is due to convection heat.  A great example is when water boils. The bubbles formed from heat rise to the top and the cooler water moves to the bottom. Another example is when a pump forces hot water to circulate through a convector which create heat, which is then released into space. 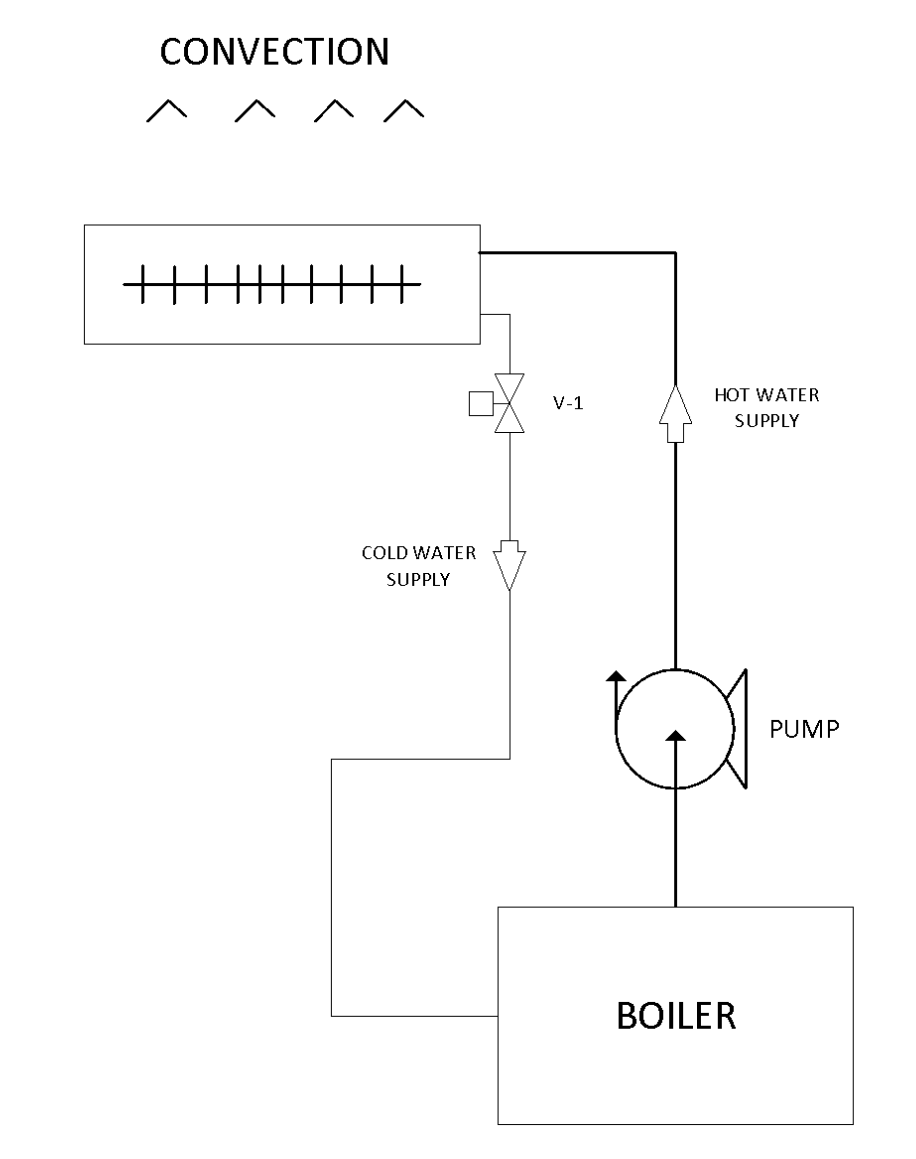 In conduction and convection heat transfer, contact always has to be between the two objects. With radiation, no contact is required between the heat source and the cooler object.It uses electromagnetic waves to transfer heat. An example of thermal radiation is the sun warming a concrete wall (or our faces). We do not have to touch the sun (ouch!) to feel its warmth. In HVAC, we find this concept in radiant heating panels which heat the walls, ceiling, and objects in a room. These objects store the warmth and release it back into the room, slowly and evenly. 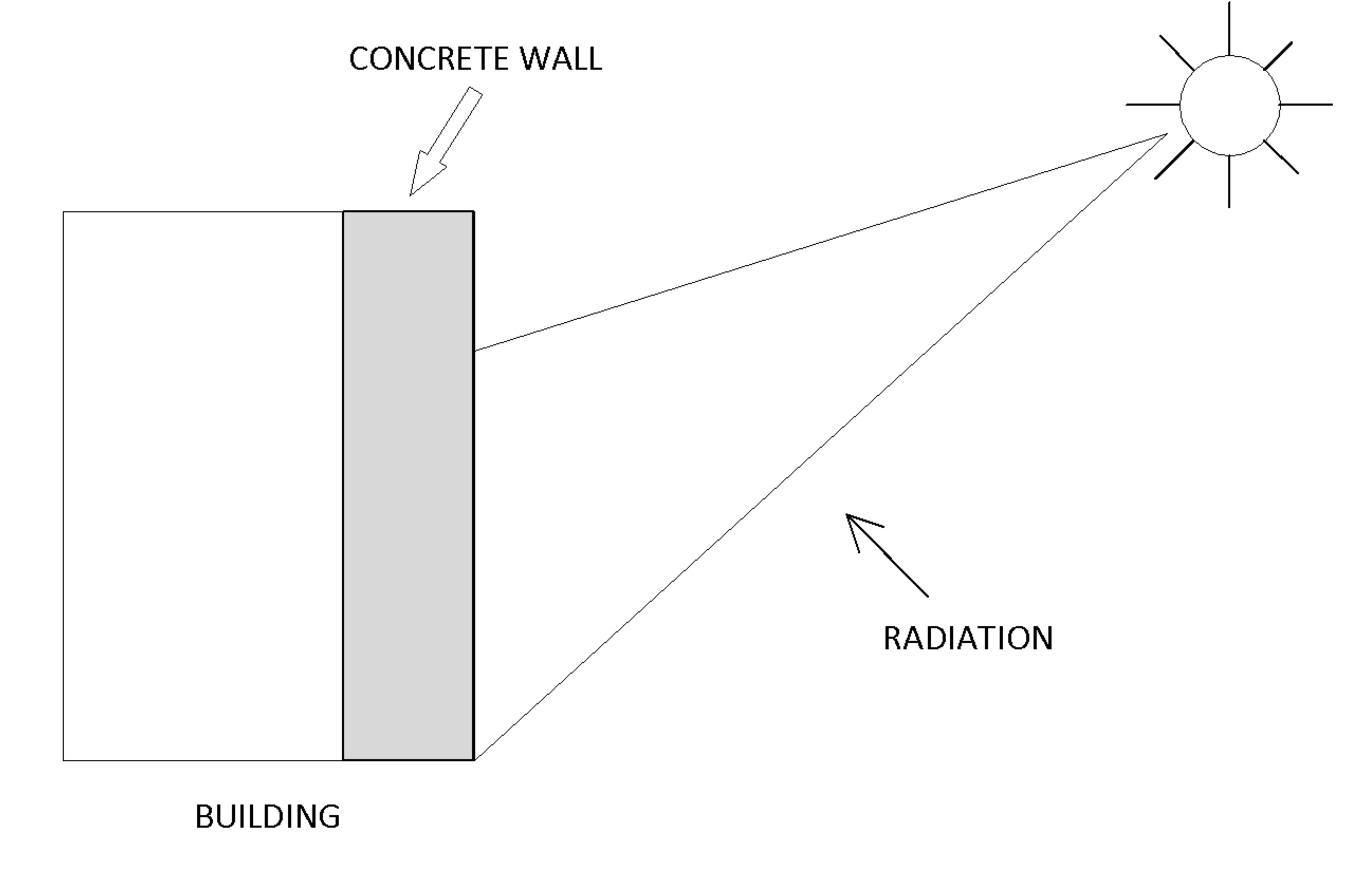 Now that we have talked about the basic principles of heating, let’s get back to the main question. What is the difference between sensible and latent heat?

Sensible heat is when energy is transferred as heat to an object, changing the temperature but not its state. If you can measure the temperature of the heat, it is sensible. A body (solid, liquid or gas) of mass m and specific heat c is heated to change its temperature from T1 to T2 without changing its state. Indeed, the volume or the pressure of the body is unchanged. The energy received by the body responsible for its risen temperature is given by the relation:

In contrast to sensible heat, latent heat is the energy released or absorbed that changes the state of a body during a constant temperature process. This process leaves temperature unaffected - it won’t get higher or lower. The most common forms of latent heat are fusion and vaporization.

Fusion is the passage of a body from solid state to liquid state. During the process of changing phasis, the temperature stays the same. Energy is supplied to a solid in order to melt it and energy is released from a liquid when it freezes. The best example is an ice cube melting at 32 °F (0°C).

Vaporization is the passage of a body from the liquid state to the vapor state. If conditions allow, the formation of vapor bubbles within a liquid, (known as boiling). Heat must be supplied to a liquid to effect vaporization. If there is not enough heat, it may come from the system itself as a reduction in temperature. The atoms or molecules of a liquid are held together by cohesive forces, and these forces must be overcome in separating the atoms or molecules to form the vapor. The heat of vaporization is a direct measure of these cohesive forces. The best example is a pot of water boiling at 212 °F (100°C).

Water is an excellent example because it can go through fusion and vaporization. Take a look at the diagram below. 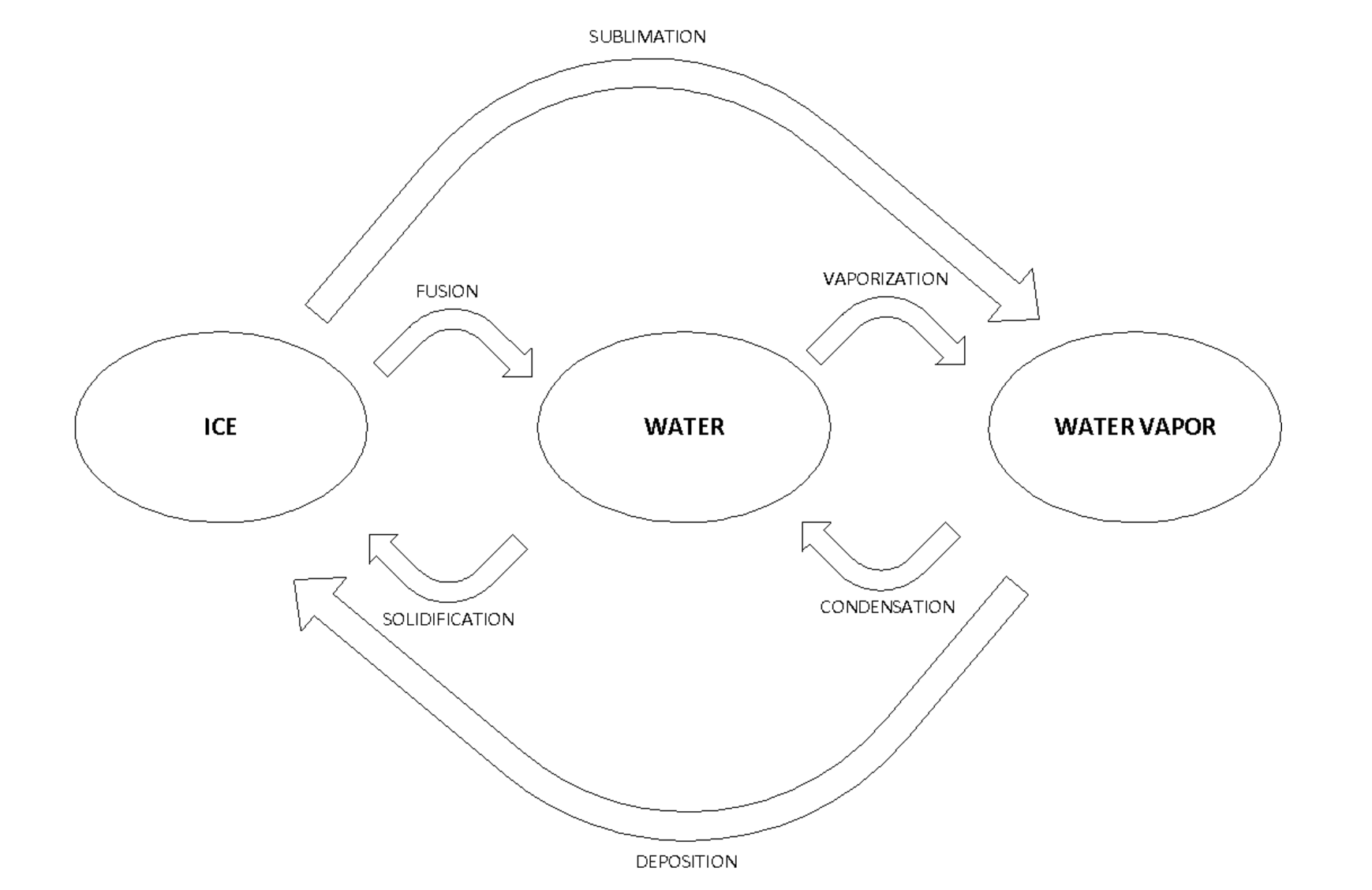 In an HVAC system, we can look at the total power corresponding to the sum of the sensible power required to lower the temperature of the air and the latent power necessary to dehumidify this air.

For a better understanding of the concept of sensible and latent heat, let’s look at this water diagram phase: 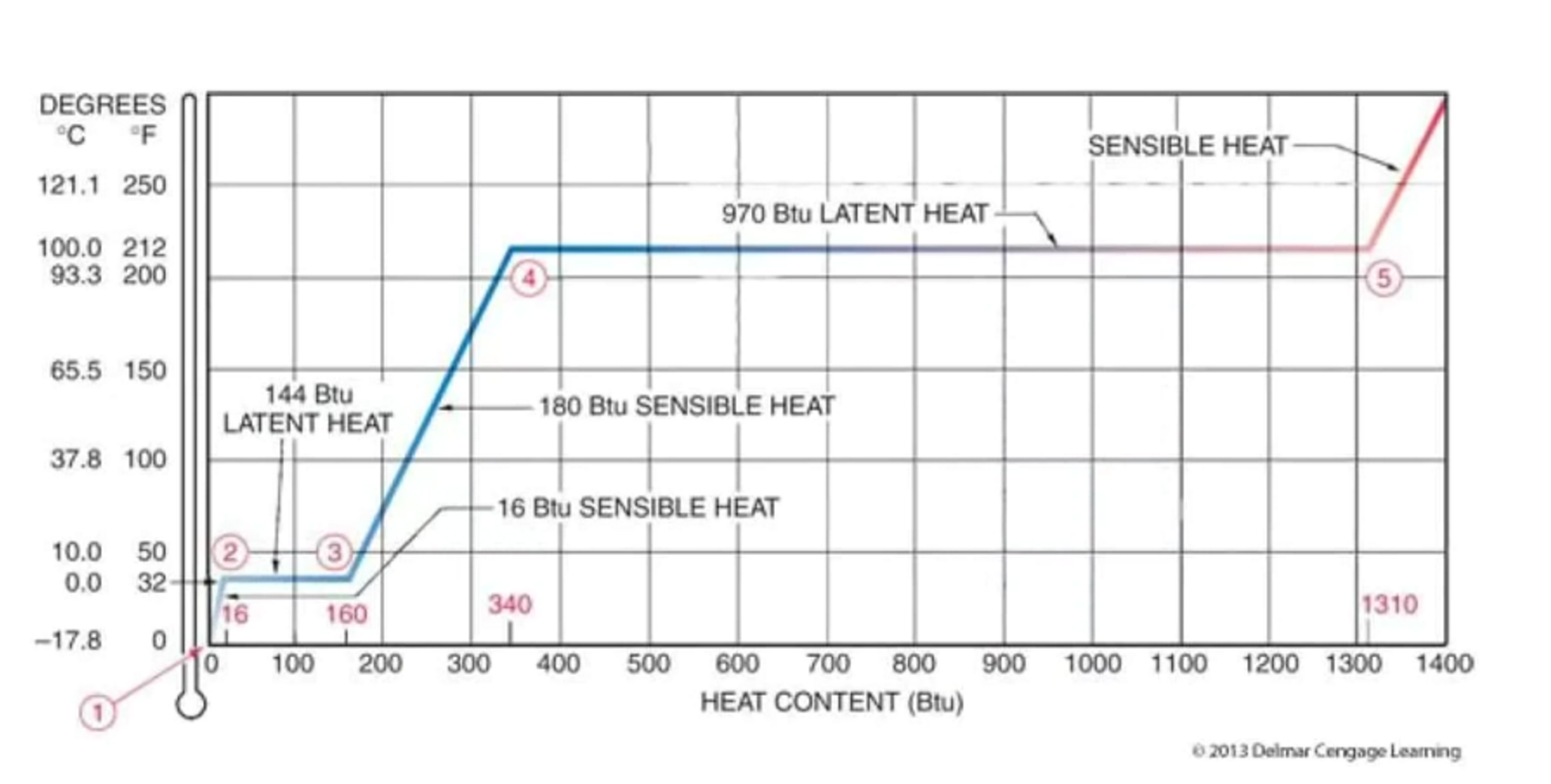 Looking at the diagram, we can see that at stage 1, the water is solid.

From stage 1 to stage 2, the ice is heated and the temperature increases. The energy spent is 16 Btu. (Sensible heat)

From stage 2 to stage 3, the ice is changing phase to become liquid. The energy spent now is 144 Btu. (Latent Heat)

From stage 3 to stage 4, the liquid is heated once again and the temperature increases. The energy spent is 180 Btu (Sensible heat).

From stage 4 to stage 5, the liquid is at a saturation point. It has absorbed all the sensible heat it can absorb. The more heat added will now change the liquid to vapor. The energy spent is 970 Btu (Latent heat).

Once all the liquid has turn to vapor, any more heat added will increase the temperature of the steam as sensible heat.

Finally, we observe that latent heat uses much more energy than sensible heat to change the phase of a liquid, solid or steam. All this is part of the basic principle of heat pump and refrigeration cycle. A heat pump is a machine or device that moves heat from one location at lower temperature to another location at a higher temperature, using mechanical work or a high temperature heat source. Refrigeration use the same principle but in reverse. Heat is now moving from a cold place to a warm place.