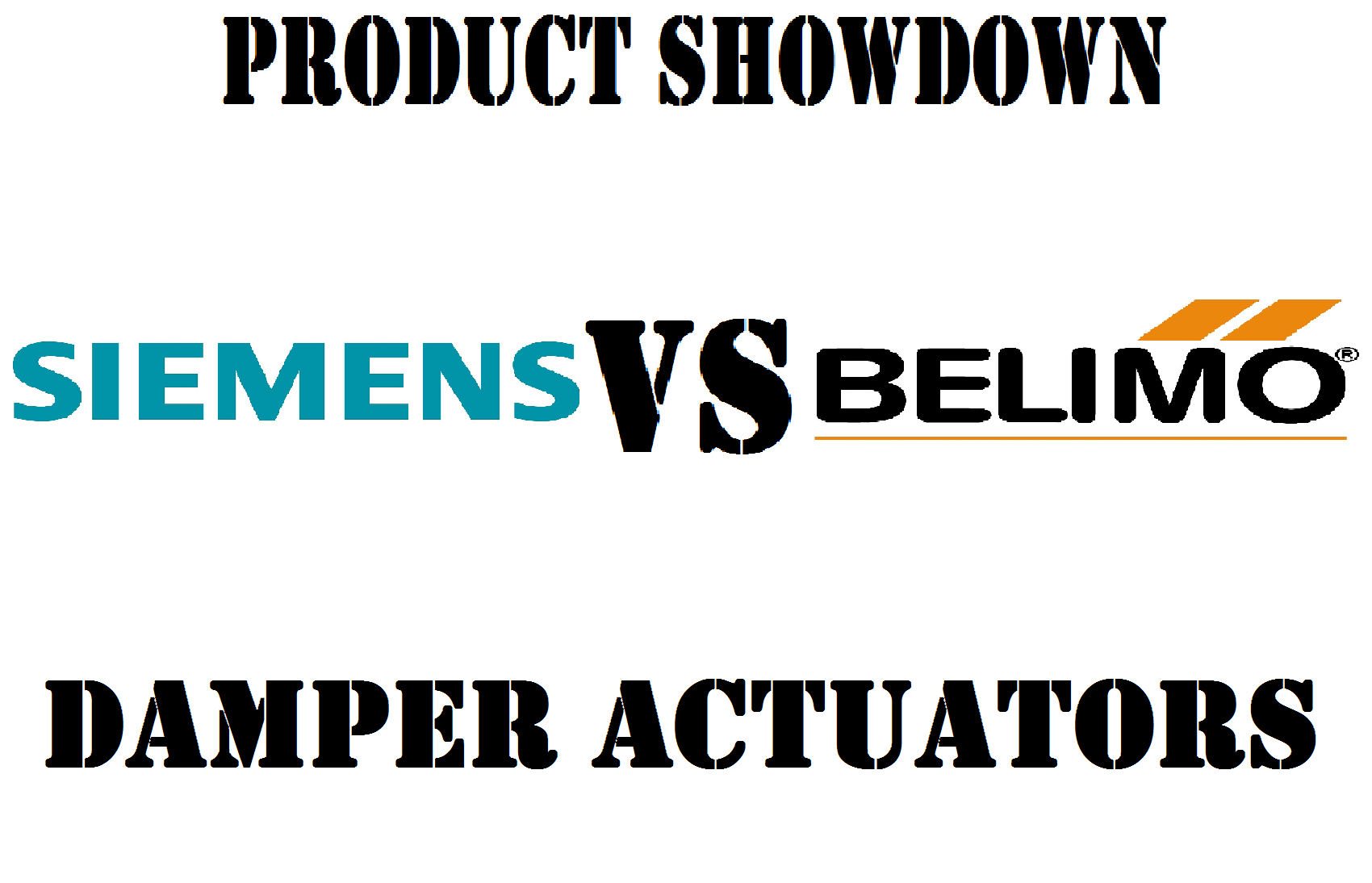 Today, we are going to talk about two major companies in the HVAC equipment world. The first one is  Siemens founded in 1847 by Werner von Siemens and Johann Georg Halske in Germany. The building technologies division was founded in 1998 and it’s now located in Zug, Switzerland. The second one, Belimo was founded in 1975 in Gossau ZH, Switzerland. For today's showdown, we are going to discuss damper actuators only. In a later article, we will talk about the valve actuators.

What is an actuator?

The actuator is an important piece of equipment in the HVAC world. It is a device that converts electric or pneumatic energy into a force of rotary or linear action. The actuator receives its signal from the controller. The controller compares the input signal with the setpoint and then generates an output signal to a controlled device. An actuator can be mounted on valves or dampers.

We can find two kinds of actuators. The first one is the pneumatic control which use the pressure of air to move. It can provide a modulating action or an on/off action. The modulating action means that they can hold any position in their stroke as a function of the pressure of the air delivered to them. On the other hand, the on/off action requires relay to switch from zero air to full air pressure to the actuator.

The second kind of actuators is the electric control. These require an electronic input. They can provide three kinds of control modes. Two-position control is a cyclical operation of the controlled equipment and the controlled variable cycles back and forth between two values. The actuator is either fully open or fully closed. The floating control is a variation of the two-position control. The controller sends two signals, one to drive open the actuator and the other one to drive it close. It will maintain the actuators last position if there is no signal on either input. The modulating control is a continuous signal that varies and is not limited to being fully open or fully closed. The controller sends a certain percentage as a signal to the actuator which drives it open to a position that maintains the setpoint without over-shooting.

How is a damper actuator used?

Damper actuators provide control, either pneumatically or electronically, for a variety of HVAC applications, including:

Now that we have covered what an actuator is and how it is used in HVAC applications, how do the  Belimo and Siemens’ damper actuators compare?

They are both direct coupled actuators which means they will mount directly to a threaded shaft that drives a damper blade back and forth. They both have a non-spring return and a spring return model actuators. Two practical things, we can find on both Belimo and Siemens damper actuator is the position indication and the manual override. This will help if you are trying to troubleshoot the actuator.

Both Belimo and Siemens have direct-coupled damper actuators for VAV boxes. They are both non-spring returns. Let’s take a look.

Belimo: We could use the LM Series which as a maximum torque of 45 in-lb. They are supplied by a 24 VAC/DC. The control signal could be on-off, floating or proportional 2 to 10 VDC. The proportional one as the ability to provide a feedback signal which could tell you the exact position of the damper. In general, the running time would be 95 seconds to open. However, the model LMCB24 is way faster, it takes 35 seconds to open. The housing of the actuator is NEMA 2, which protect from failing dirt and dripping water or light splashing.

Siemens: There are two models we could use. The first one would be the OpenAir GDE Series which as a maximum torque of 44 in-lb. It is also supplied by a 24VAC. The control signal could be floating or proportional 0 to 10 VDC. The proportional ones come with a built-in position feedback. The running time varies between 90 seconds to 108 seconds. Like Belimo the housing is also NEMA 2.

The second one for Siemens would be the  OpenAir GLB Series. It’s pretty similar to the GDE one, the only differences are the maximum torque and the running time. Indeed, this actuator is ideal for control requiring up to 88 lb-in. Therefore, the running time is a little slower, it varies from 125 seconds to 150 seconds.

This kind of application requires much more torque than the VAV boxes and has to be spring return direct-coupled actuators.

Belimo: The AF and NF series are the perfect actuators for this job. The AF series is a 180 in-lbs maximum torque. In general, this series would accept a power supply of 24 VAC, but the model AFBUP can be supplied by a tension between 24 and 240 VAC. The control signal of this actuator is either on-off or proportional 2-10 VDC or 4-20 mA. The proportional one as the ability to provide a feedback signal. The running time is either less than 75 seconds, 95 seconds or 150 seconds. However, on spring return it takes less than 20 seconds for the actuator to go back to is original position. Most of the time, the AF series is provided with a NEMA 2 housing. For outside applications, it can be provided with a NEMA 4X housing. This enclosure type will protect the actuator from windblown dust, rain, sleet, snow, splashing water, and hose directed water. It can even come with a heater for cold weather.

The NF series has the same features as the AF series, the only difference between them is the maximum torque allowed.  This one can go to a maximum of 90 in-lbs torque.

Siemens: The OpenAir GCA series is ideal for the control of return air, mixed air and exhaust dampers that require up to 160 lb-in torque. It is available in 0 to 10 Vdc or 2 to 10 Vdc modulating, floating and on/off control signals. The tension could be 24 Vac/dc or 120 Vac for the 2 position control. All modulation type comes with a built-in position feedback. The runtime with the motor is 90 seconds, with the spring return is 15 seconds. Unfortunately, this model only has a NEMA 2 housing enclosure.

There has been an evolutionary shift in the damper actuation needs for the fire and smoke dampers. The most important thing about those kinds of actuators would be the resistance at high temperature. Both Belimo and Siemens have a wide variety in their product line. Let’s find out.

Siemens: They offer two different models: OpenAir GND Series and OpenAir GGD Series. The first one as a torque of 53 lb-in and a runtime on motor of 15 seconds and 15 seconds as well on the spring return. The operating voltage can be either 24 Vac, 24 Vdc, 120 Vac or 230 Vac. This one can resist to a maximum of 350°F but doesn’t specify the duration. Siemens provides four different electronic fusible link which will close the actuator in case of fire. They are set at those temperatures: 165°F, 212°F, 250°F and 350°F. The GND series use a NEMA 1 housing.

The only difference between the GND series and the GGD Series would be the torque and the maximum temperature in case of fire. Indeed, the GGD Series will have a maximum torque of 142 in-lb and it will resist to a maximum of 350°F for ½ hours.