Before we delve into the differences of Variable Air Volume (VAV) and Variable Volume & Temperature (VVT), we must first learn how they are used in air conditioning a room or space. There are two ways for controlling the air in a room or space. In an individual room, the control is maintained by a room sensor and a controlled device such as a valve or damper actuator. The method of control may be pneumatic, electric, electronic or digital. The key for a good zoning system is to deliver the conditioned air to the calling zone as fast and quietly as possible in order to satisfy the demand.

An air terminal unit (ATU) regulates the quantity and temperature of air delivered to satisfy the temperature of a room or space. They are available in many configurations. They are also classified by the Air Handling Unit (AHU) design. The controls of an ATU can be basic as very complex. Indeed, the room sensor could control only a damper or it could control a damper with an airflow sensor.

An air handling unit (AHU) is a central air conditioner station that regulates and handles the air that, usually, will be supplied into the buildings by the ventilation ductwork. The term handling means that the air will be delivered with a thermal, humidity and indoor air quality treatment. The AHU treats the air by filtering, cooling and/or heating, humidifying and/or dehumidifying. They are many configurations of AHU, here is a short list of different ones:

To be considered an AHU, the unit must have at least those components:

The Air Handling Units can have several components, depending on the complexity and requirements, such as energy efficiency, of each specific building and application. Here are more components we can find in AHU:

Now that we understand what an air handling unit and an air terminal unit are, how do VAVs and VVT systems fit in?

When it comes to room or space control for air systems, there are two things we have to consider, airflow and temperature. Both VAV and VVT systems vary airflow to control room or space conditions. First, let's explain what VVT and VAV systems are. Later, we will explain the difference between those two.

What is VVT (Variable Volume and Temperature)?

The VVT is called variable volume because it delivers a variable volume to each zone, as load dictates. It is called variable temperature because the temperature of the air supplied by the central unit varies with time. The VVT is an economical all air zone system that is ideal for many commercial jobs. It works well for systems up to 25 tons of total cooling load. The system is provided with a complete factory packaged control system designed to provide multiple zones of temperature control.

Typically, the systems use a package rooftop unit for their central air source and heating/cooling capacity to the VVT boxes. Each box modulates its volume control damper in response to the zone thermostat. If in one zone the damper is starting to close, then the extra air is bypassed into a ceiling return air plenum or a ducted return. Indeed, the zone airflow is variable but the rooftop unit airflow is constant. Each box has a minimum cfm setting to ensure adequate room air circulation and outdoor air ventilation regardless of zone load reduction. The minimum cfm could vary from 10% to 30% of design flow. 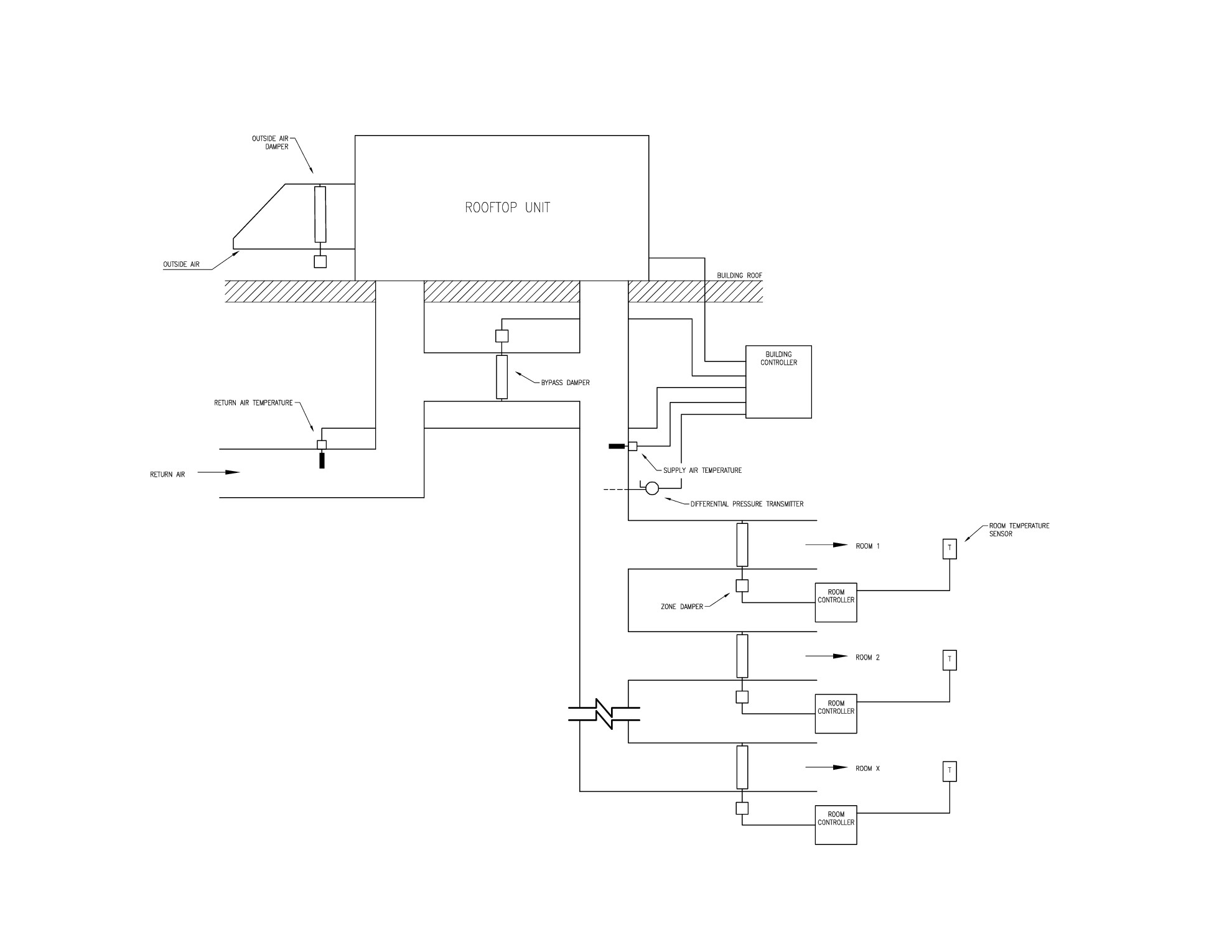 When all the zones require some cooling, the unit stays in cooling mode. The same thing happens in heating mode. However, when both heating and cooling loads occur at the same time, it becomes a time-share system. The definition of time-sharing is: the sharing of a computing resource among many users by means of multitasking at the same time. In our case, the electronic controls determine the greatest need (heating or cooling) and they first satisfy that mode centrally. Then, once satisfied, it switches over to the opposite mode. The system can continue switching over from cooling to heating, back and forth, to satisfy all zones. In the mid-season, the result is inevitable dissatisfaction while the unit is in the wrong mode and the damper to that zone is closed. For a better comfort, the perimeter zone damper units can be equipped with hot water supplementary heaters. Electric heaters can also be used instead.

What is VAV (Variable Air Volume)?

The VAV is an air terminal unit (ATU) that regulates the quantity and/or temperature of conditioned air delivered to satisfy the temperature requirements. It will vary the airflow at a constant temperature. There are two kinds of variable air volume units, the pressure dependent and independent. The first one represents the basic control of a variable ATU. It will modulate the damper actuator from the zone thermostat regardless of system conditions. If there is an increase in the system static pressure, the zone thermostat won’t be able to sense the sudden increase of airflow. However, the pressure independent unit will deliver the required air volume to the room, even if the supply static pressure increases. A flow sensor is installed in the supply airflow to modulate the damper actuator to control air volume. It monitors and responds to the velocity of the air flow. The room sensor resets the airflow setpoint as the space thermal load changes. The airflow control loop can be set to maintain minimum airflow at unoccupied load conditions while maximum airflow can be set to limit flow to meet design conditions.

In general, the VAV system uses a compact or modular unit for its central air source and heating/cooling capacity. The supply air temperature is controlled using the boiler and chiller to heat or cool as the case may be but the supply temperature doesn’t change. During moderate weather, the outside air might be at the right temperature to supply to the zones, allowing the boiler and chiller to shut down, saving energy. The exhaust and supply fan have variable frequency drives. If in one zone, the VAV box damper is starting to close, then there will be an airflow increase in the system. The building controller will modulate the fans to maintain the differential pressure transmitter at his setpoint. Therefore, the system airflow will decrease.

For a better comfort, reheat on each VAV box is commonly used for tighter zone control. 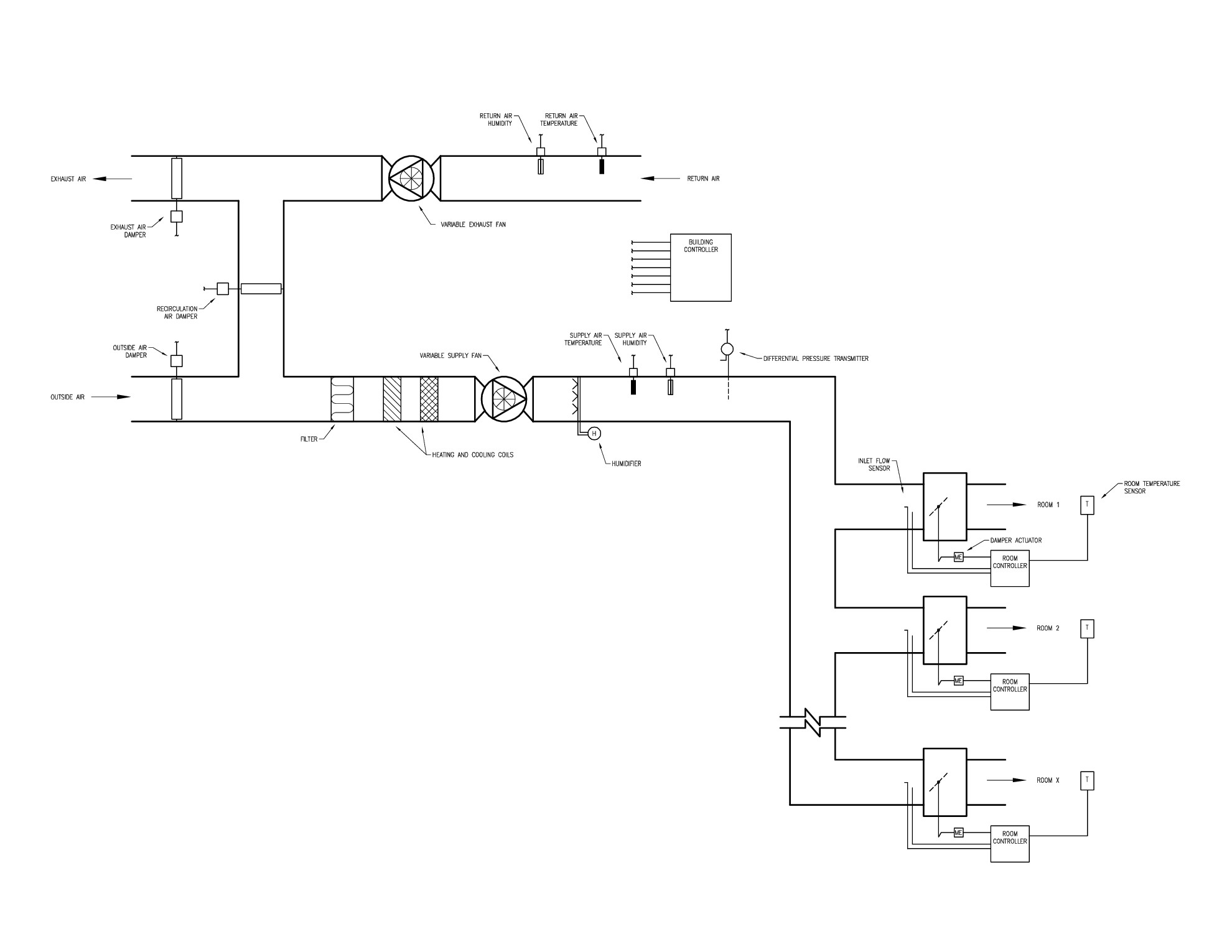 What is the difference between VAV vs VVT HVAC Systems?

VVT systems cost less than VAV systems. Indeed, rooftop units are cheaper than central plants with boilers, chillers, pipping and controls. The variable fans motors cost more than constant flow fans in a packaged unit. In the end, however, you obtain a poorer building control overall with a VVT system.

VVT systems require bypass ducts between the supply and return ducts at the unit. For retrofits to existing equipment, this means having headroom available for the bypass duct. Both VAV and VVT systems require ceiling space for terminal boxes and straight lengths of ductwork. For low-rise buildings with flat roofs, rooftop units are more attractive than carving out a mechanical room for a central plant, leaning the design towards a VVT system.

VVT systems use a time-share system between heating and cooling when both are required from the same unit. This is particularly important during times of fluctuating weather or for buildings that need interior cooling during heating season. VAV systems, with their constant temperature supply, can satisfy its zone regardless of what neighbouring zones need by simply varying the airflow.

VAV systems use variable frequency drives to slow the supply fan speed when the dampers in the boxes close. VVT systems maintain a bypass between the supply and return ducts to the unit, meaning that the fan runs full tilt regardless of whether the VVT boxes are fully open or averaging 20% open. From this perspective, VAV systems are the winner.

In conclusion, the VVT system’s low initial cost makes it the more attractive of the two options for smaller budgets. For retrofits on buildings with existing rooftop units, a VVT system is the clear choice. However, VAV systems demonstrate superior performance and result in far fewer discomfort from occupants. Constant supply air eliminates situations where terminal boxes are closed waiting for the central system to switch to the right mode. The owner receives the added benefit of energy savings without sacrificing thermal comfort and performance.